Government was not designed to obstruct every area of our lives. It is time to get back to the original intent of the Constitution.

At 29, Jerrod faced one of the biggest battles of his life when he was diagnosed with terminal cancer and given a 5% chance to live. Jerrod made the choice to refuse all conventional medical treatment, turning to his faith in God, the prayers of his loving wife and family, and adopting a natural diet primarily consisting of the nutrient-rich produce of the exceptional Washington soil. A year later, Jerrod was declared cancer-free and has never suffered any health issues since then. This began Jerrod's fierce stand for personal autonomy regarding medical choices, a position that is more important now than ever as even some of our Republican representatives have succumbed to the Left’s control culture and the unconstitutional mandating of untested vaccines.

Although Jerrod comes from humble beginnings, he has always believed that the American dream is alive and available for all who are willing to work for it. Jerrod is determined not to let this dream die at the hands of a Leftist minority seeking to control the American people. With this commitment to upholding the Constitution, Jerrod will defend the families, farmers, and small businesses of Central Washington from oppressive mandates and restrictive, bureaucratic practices. In Congress, Jerrod will fight to protect the Border and also protect the nation from being sold piece by piece to countries like China because of oppressive taxes that make it impossible for family farms to survive. Jerrod and his wife Nikki are also committed to fighting the pervasive agenda of the Department of Education by opposing teachings like CRT and Gender Ideology in the classroom. 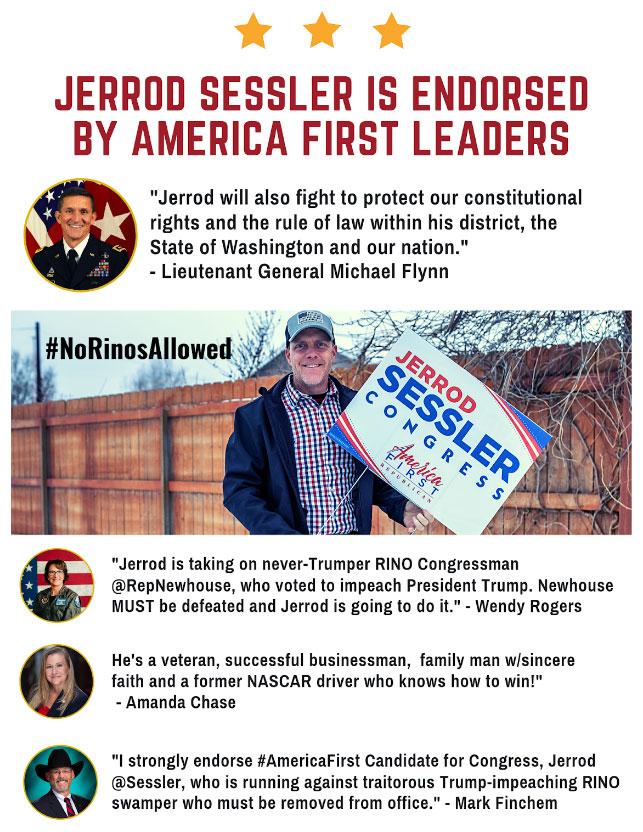 "Deregulation increases liberty and promotes growth. We must respect the social compact of trusting each other rather than relying on government to control every aspect of our lives."